What happens when you allow any person to colour one pixel on a massive white canvas every 20 minutes for a period of 5 days?  An amazing piece of art, co-created by a community of millions, showing symbolism, jokes, memes, reality and fiction from hundreds of online communities.  Originally launched 5 years ago by  social medium Reddit the 2022 ‘r/place’ saw  public transport and urban mobility as a great source of inspiration for the 6 million artists around the world.

After its first iteration on 1 April 2017, Reddit opened the second ‘r/place’ canvas on 1 April 2022. The entire canvas is made up of 4 million pixels. Simply put, users of the site can change the colour of an individual pixel, choosing from a 24-colour pallet. After 20 minutes, the user is allowed to change a second pixel. And this keeps going until the canvas is locked. When that happens, nobody knows.

Quickly, communities form. Some revolve around nations, while others try to portray famous paintings, movies or music. Asterix makes an appearance, just like Freddy Mercury, Star Wars and Nelson Mandela.

In 2022, public transport and urban mobility made multiple appearances among the creations of ‘r/place’. So let’s search the canvas for some mobility gems and their origin stories.

As the community drew a German flag in the early moments of the project, symbols like an ode to Formula 1 racing driver Michael Schumacher and the European flag were added. And then, out of the European flag sprung a German high speed ICE.

Now this could have been the end of it. Until the French community proposed “that we put a TGV in ‘r/place’ since the Germans have an ICE”. And so it happened.

Bonus points for whomever spots the wireless network joke.

On another German flag, nearing the end of the project and right on the edge of the canvas, a green tube appeared. Directly above an Indian tiger, and next to an appetising meal of bratwurst, chips and beer, an S-bahn train exits the tunnel.

Even though it did take the community a while to figure out what the exact colours and branding of the train should have been.

Mobility as the nation’s pride

But here a small border conflict started, as two hours later a second carriage was added to the Czech train; a carriage that encroached on the Slovakian flag.

The border conflict resolved within the hour however, as the Slovakian community drew in the tram of its capital Bratislava.

The bus made its appearance on the Colombian flag. Next to a cup of coffee, the community drew in a Chiva (Spanish for goat), also known as Escalera (Spanish for ladder and stairs). These busses operate in rural Colombia and are adapted to the mountainous geography of the country. They are usually painted in bright yellow, blue and red to represent the flags of Colombia, Venezuela and Ecuador.

The very first sign of public transport however, came from the Netherlands. At 21 hours, the Dutch community created their first train at the very top of the canvas. Driving through a field of tulips, and being chased down by Max Verstappen and a pair of 16th century ships, the NS train would remain until the end of the canvas.

As we search the canvas for examples of active mobility, the most striking example comes from Belgium. On a backdrop of the nation’s flag, we find actor Jean Claude van Damme, the saxophone, musician Stromae and a line of bikes.

Among the 4 million pixels and countless artworks, these are just a few of the mobility stories. There are likely many micro mobility solutions hidden in the canvas. If you find any, why not tweet at us?

But there is one particularly vocal community we have to talk about. They coloured their first pixels within the first two hours of the Canvas opening and soon sharedtheir signature statement. Of course we are too polite to comment! 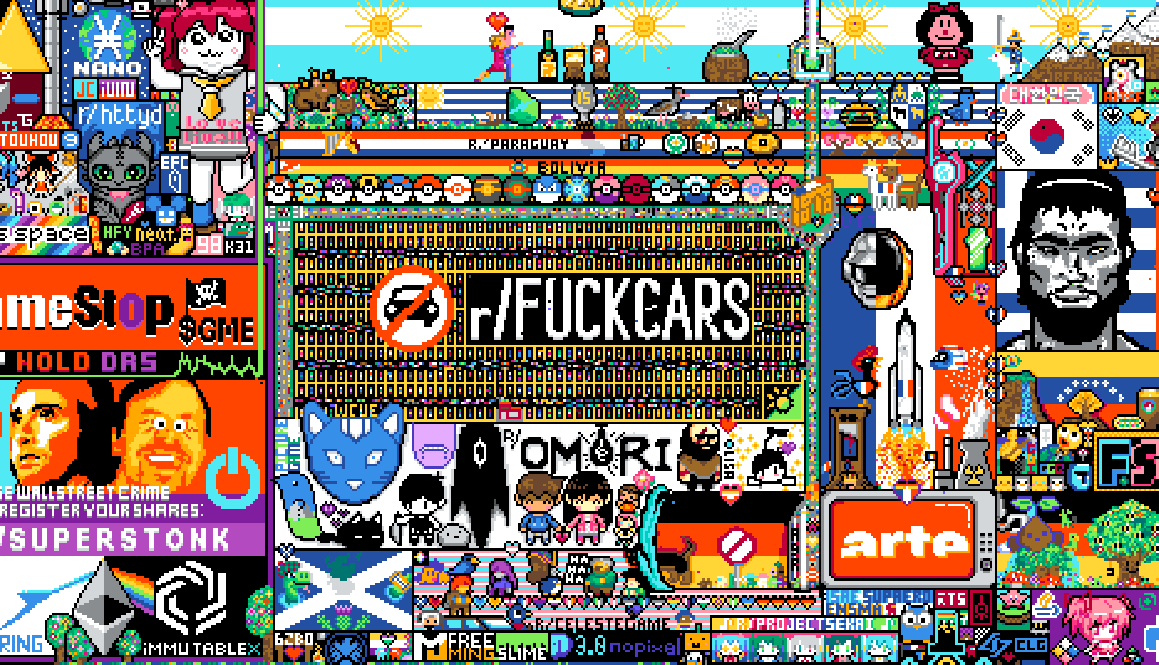