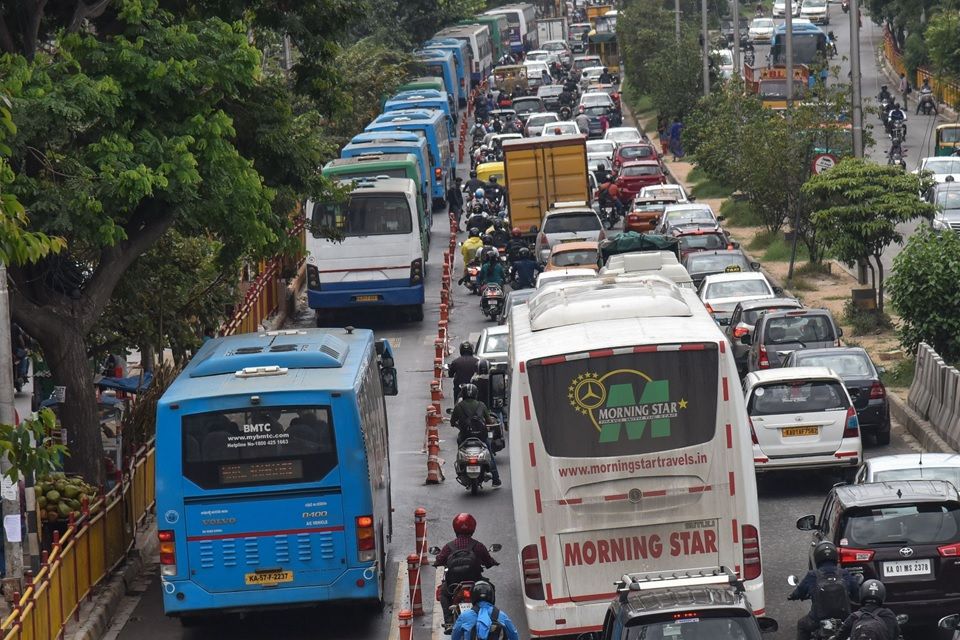 Bengaluru has successfully completed one month of implementation of its path breaking ‘Bus Priority Lane’ project launched in November. Branded as ‘Nimbus’ (short form for ‘Nimma bus’ or ‘your bus’ in Kannada), the project involves providing an exclusive lane for buses between ‘Tin Factory intersection’ and ‘Central Sink Board’ intersection a 20 km corridor along the highly congested Outer Ring Road of the city. In the wake of falling interest in Bus Rapid Transit (BRT) projects in India, this is a welcome initiative and the current article looks at the implementation process and the performance of the corridor so far.

The city of Bengaluru has been facing increasing congestion over the years due to rapid growth in car and two-wheeler usage-which is the second highest in the country. It is estimated that the cost of time lost due to congestion in the city is aboutINR 380billion (38000 Cr). The 7.7 million (77 lakh) registered two-wheelers in the city cater to just 24% of the peak hour vehicular trips. This is despite the city having the largest fleet of city buses in the country operated by the Bengaluru Metropolitan Transport Corporation (BMTC) which caters to 37% of the peak hour vehicular trips with just 6,500 buses. Despite its efficiency in operations, increasing congestion has led to the average speed of buses dropping to about 10 kmph. What’s more, the low speeds also resulted in declining productivity of BMTC’s fleet i.e. the vehicle-km operated per vehicle dropped from 230 km per bus per day to 200 km per bus per day in just 4 years, resulting in an overall reduction in public transport availability in the city. The declining service availability combined with low speeds of available services has led to a rapid decline in bus usage in the city-contributing further to the increasing congestion.

In this context, the city of Bengaluru has taken up the bold decision to rationalise road space across modes in proportion to the people they carry. As a result, ‘Bus Priority Lanes’ i.e. an exclusive lane for the movement of buses has been created. The short term objective of this initiative is to provide high speed access for majority of the road users by taking buses out of congestion. In the longer term, faster travel time in buses can potentially attract private car and two-wheeler users to shift to buses. The idea has been conceptualised by BMTC with technical inputs from UITP India. It has later been taken up as a priority area of intervention by Government of Karnataka which mobilised various civic agencies including the Bruhat Bengaluru Mahanagara Palike (BBMP), the Municipal Corporation which is in-charge of the road infrastructure for bus priority lanes and the Bengaluru Traffic Police (BTP), which is in-charge of enforcing the exclusive bus lanes and realigning intersection traffic movements. Such was the level of interest in the Bus Priority Lanes (BPL) that the entire process from idea to execution has taken place within a span of three-months. The city has taken an infrastructure and investment light approach to BPL by using painted lanes and temporary bollards to create bus lanes which enabled such quick implementation. This is in sharp contrast to the many BRT projects in India which take multiple years to implement the project and sometimes lose interest in the success of the project in this process. However, it has to be noted that BRTs will also involve physical infrastructure like permanent barricade for bus lanes, shifting of utilities, creation on new bus stops etc. which weren’t part of the current initiative.

The implementation of the BPL involved proactive measures from BMTC, BBMP and the traffic police to address issues with street infrastructure, planning for bus services and re-engineering traffic flow. Once the teething issues were resolved, the bus lanes have resulted in an immediate improvement in bus passenger perception as observed from the surveys conducted by Citizens for Bengaluru (CfB) within one week from the commencement of the corridor. Now that the corridor has completed six weeks of implementation, a review of its performance before and after the BPL provides some insights into its performance.

The performance of BMTC buses in terms of their travel time, ridership and revenue were analysed using the data from Intelligent Transport Systems (ITS) of BMTC, to assess the impact of BPL. Travel time impacts were measured for the weeks of 29 September to 05 October i.e. two weeks before the BPL and 24 November to 30 November i.e. two weeks after the BPL. The ridership and revenue trends have been analysed for the past three months. The following are the key findings:

These findings point to a significant success for the corridor from the point of view of bus users. Going forward, the city needs to build on this to ensure that the BPL, which started as a pilot project becomes a permanent fixture along the current corridor and even scale up to new corridors. This will require a host of improvements including smoother entry and exit to the corridor for various modes, better enforcement of bus lanes, improving traffic signal management for better throughput and updating bus timetables in accordance with the reduced travel time along the corridor. The success of the corridor certainly provides the right impetus for these longer term actions.