Roberto Sganzerla, the Brazilian specialist on mobility marketing and communication, developed  the communication plan of the BRT System of the cities of Peshawar and Karachi in Pakistan.

Both projects in South Asia won global prizes and were supported by a member of UITP in Latin America.

The project, which was funded by the ADB (Asian Development Bank), contributed to the development of sustainable urban transport in Peshawar through the implementation of a BRT corridor, with a focus on accessibility and mobility. In doing so, it made Peshawar safer, more accessible and more business-friendly through climate-resilient, low-carbon urban infrastructure.

The results obtained also generated recognition for the city of Peshawar through an honorable mention during the 2022 Sustainable Transport Award (STA).

There has been a 2% to 20% increase in the number of female users since the launch of the BRT system, closing the gender gap in modes of travel and increasing access and safety for women in the city. 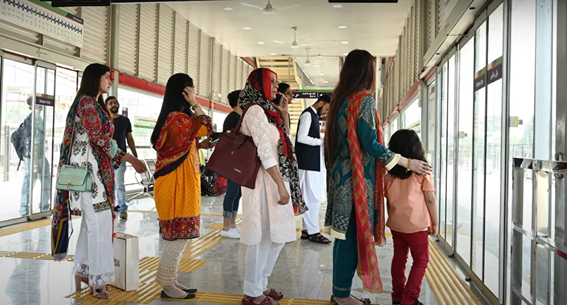 Peshawar served for centuries as an important trading center for trade routes between Afghanistan and Central Asia. Capital of Khyber Pakhtunkhwa province, Peshawar is still recovering from the impacts suffered at the beginning of the twenty-first century and is currently among the main cities in Pakistan, with more than 2 million inhabitants.

The Peshawar BRT was called ZU Peshawar. The expression ZU is widely used in the region and means “Let’s go!” in Pashto, the local language. The project also included the Zu Card, an electronic card to use the system, and Zu Bike, a bike-sharing system that allows integration with bus lines, according to Sganzerla.

Watch full video of the ZU Peshawar Project (from 12’40):

Karachi is the financial, commercial and port center of the country. With a population of around 15 million, it is the largest city in Pakistan and one of the 10 largest cities in the world.

In May 2021, Karachi received its new hybrid buses, manufactured by the Chinese company Zhongtong, for the operation of the BRT Karachi Breeze.

The name Karachi Breeze, was chosen for the gentle wind and cold night blowing from the sea, bringing relief after the hot summer days, according to Roberto Sganzerla.

The project also received financing from the ADB (Asia Development Bank) and aims to restructure the public transport system of the megacity, providing greater comfort and speed to the daily commutes of its inhabitants.