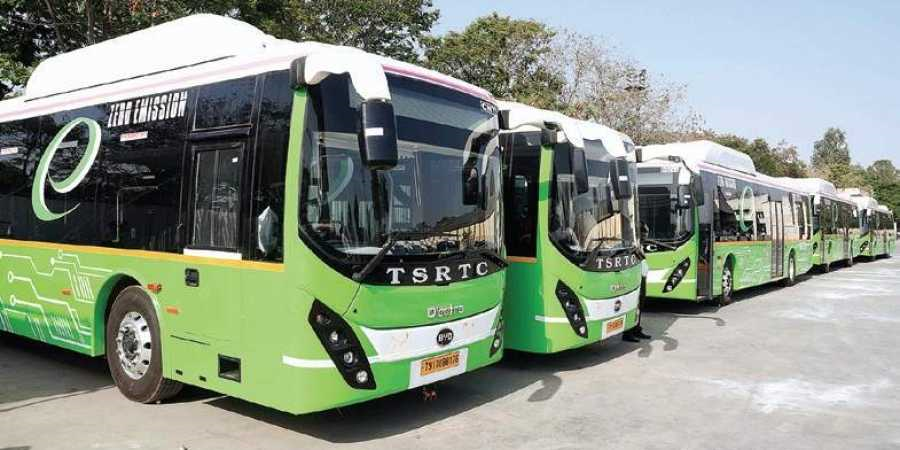 Covid-19 induced financial constraints have set back Indian bus agencies’ plans to pilot and scale up electric buses (e-buses) under the Faster Adoption and Manufacturing of Electric Vehicles (FAME)-II scheme. However, before the Covid lockdown began in March, many of the urban and intercity bus agencies have made significant progress towards procurement of e-buses under FAME-II. Department of Heavy Industries (DHI) that administers this scheme has sanctioned a total of 5,595 e-buses in the phase-I of e-bus funding under FAME II. Out of these, the procurement process for about 2,450 buses has already been completed and approved for subsidy by DHI. The final contracts and deployment timelines are likely to be taken up once normalcy returns to operations. This period presents us the opportunity to learn from the procurements carried out so far and incorporate lessons in the future e-bus procurements under FAME II and otherwise. Hence, we capture the high-level finds from FAME II procurements carried out so far in this article.

This article presents the summary of data and feedback collected by UITP India through various secondary data sources and interviews. It is likely that some of the data points may have changed since we collected the data and hence we only present aggregated findings from the analysis without attributing them to any specific agency. At the same time it needs mention that some of the cities which floated tenders for e-bus procurement under FAME-II have cancelled their earlier tenders and are in the process of re-tending and selecting service providers. Higher than anticipated quotes during initial rounds of tenders and lack of active participation from bidders are the key criteria for such cancellation of tenders. Hence, the data presented here is only representative of the cities that have already completed the tendering process and not necessarily the entire FAME-II e-bus scheme.

Summary of tenders closed and sanctioned for subsidy by DHI

The 2,450 buses that closed the tendering process so far and were sanctioned subsidy from DHI included bus agencies from across 13 states. This includes 2,270 buses for urban services in 30 cities and 180 buses for intercity operations across 4 agencies. 9m long buses were the most preferred model across cities with 81% of the total buses (i.e. 1,990 buses) opting for this variant while the rest are 12m buses. Just three authorities i.e. BEST, Mumbai (300 buses) Janmarg, Ahmedabad (300 buses) and Uttar Pradesh (combined procurement of 600 buses for deployment across 11 cities) constitute about 50% of the total buses sanctioned so far.  The second largest category of procurements is cities with 25-50 buses per tender which constitute about 28% (680 buses) of the sanctioned buses. Figure 1 presents the detailed split of buses sanctioned for subsidy according to the parcel size of procurement. 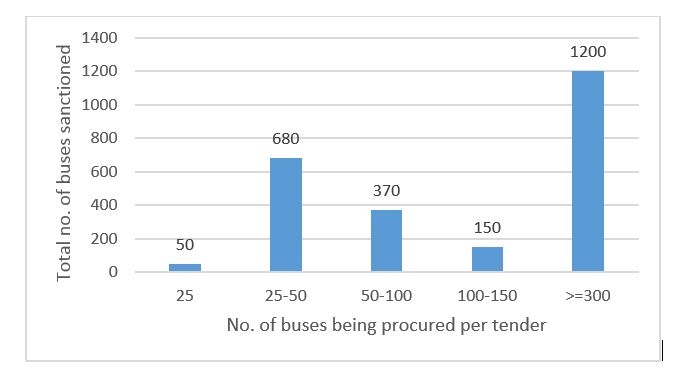 Suppliers of e-buses sanctioned for subsidy

Many of the bids received across states were front-ended by the Original Equipment Manufacturers (OEMs) that will supply the buses. Figure 2 presents a summary of the suppliers identified so far, segregated by 9m and 12m buses. PMI-Foton with the largest no. of sanctioned buses is the OEM with a total of 800 sanctioned buses comprising of 750 9m buses out of which 600 are through the single tender in Uttar Pradesh. Olectra-BYD is the second largest supplier with 635 buses including 535 9m and 100 12m buses. Tata Motors was shortlisted for 420 buses across Mumbai (300) and Ahmedabad (120) while JBM-Solaris with 330 buses and Ashok Leyland with 65 buses make up the remaining OEMs. Mozev (earlier known as Mytrah Mobility) is the only non-OEM entity which is selected as a supplier for 100 buses across two separate 12m intercity city bus contracts in Maharashtra and Rajasthan.

Cost of procurement of e-buses under FAME-II

All tenders adopted a Gross Cost Contract (GCC) based procurement as recommended by the DHI, with the least cost (L1) quote per km of operations as the selection criteria of the bidder. Electricity cost isn’t part of the quoted cost in most cases and is taken by the contracting entity. The subsidy available on the vehicle and charging infrastructure for various bus types is pre-decided by the DHI and hence these costs factor-in the subsidy available. Figure 3 presents the all-important numbers of the price-range of the L1 bids received by the contracting authorities. It is re-emphasised here that key cities like Delhi, Bangalore, Pune and others in Tamil which together comprise more than 1,400 tendered e-buses haven’t finalised their bidders yet. The numbers presented here only present the story so far and can vary as other cities finalise their bids.

Of the buses sanctioned so far, the average L1 quote for 9m buses across urban and inter-city operations is INR 63.3 per km while it is INR 69.0 per km for 12m buses. Hence, on average 12m buses are only 9% more expensive compared to 9m buses. Cities need to evaluate this carefully as the staff costs are the same for both the buses while the capacity and revenues are about 25-30% lower for 9m buses. Hence, 12m e-buses may have a better payback compared to 9m e-buses, subject to availability of adequate demand and street infrastructure for operation.

iii) Operational and Financial reasons for variability in costs

Cities have specified significantly different operating conditions for buses such as contract tenure, assured-km of payment per day, daily vehicle-km of service needed, average speed of operations, staff needs and need for top-up charging during day. The wide variation in quotes received within the same length category of buses re-emphasises the fact that cost of service delivery over the lifecycle of a bus depends more on Operational Expenditure (OPEX) items such as staff cost, energy cost, maintenance cost etc. more than the Capital Expenditure (CAPEX) on the bus, charging and other ancillary infrastructure.

Further, various financial terms of the contract also impact the quoted cost by bidders significantly. Items like performance guarantee and bid-security requirements, periodicity of payment, penalty terms, terms of payment in case of termination, Force Majeure clauses etc. have significant impact on the bankability of the project. These items varied significantly between tenders based on the preferences of the contracting authorities. As a result, the perceived bankability of the project varies between cities, thereby adding up to the risk-premium the bidders build into their quoted costs. UITP is carrying out a detailed analysis of the variations between tenders on such clauses and will share the findings of our analysis in the near future.

The quoted costs of electric buses, when combined with the additional costs, to be incurred by the contracting entity, such as costs on electricity, conductor, depot development, contract management and other administrative expenses. Adding these costs to the quoted cost for the vehicle and driver makes the overall cost of e-bus operations 50-100% more expensive compared to the conventional diesel and CNG powered buses in some cities. This is despite the available FAME subsidy.

All the relevant stakeholders involved in e-bus service delivery such as the service contracting authorities, OEMs, operators, financing institutions and DHI need to come together to identify a roadmap to reduce the cost of e-buses to be procured in the future. This is the best way forward to ensure sustainability of the current and upcoming e-bus procurements within and beyond FAME-II.

The final report can be downloaded from here