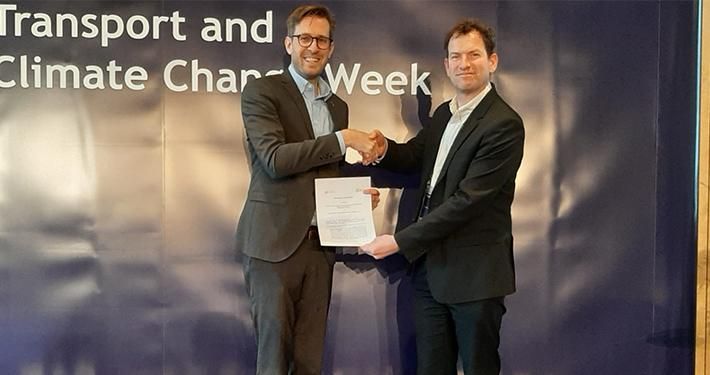 This week, at the Transport and Climate Change week in Berlin, UITP took an important role in the discussions and activities around clean bus technologies and sustainable urban mobility.

It was at the heart of our ‘One Planet, One Plan campaign’: the use of low carbon technologies in the urban transport sector is key to reducing greenhouse emissions and air pollution and to achieve sustainable and liveable cities. Now to know what to do is one thing – to take action is what it is truly about.

Therefore, UITP is proud to announce it has signed a Memorandum of Understanding (MoU) with GIZ (Deutsche Gesellschaft für Internationale Zusammenarbeit) to advance sustainable urban mobility in light of the Transport and Climate change week.

Under the MOU, UITP will share knowledge and content from our broad membership base with GIZ on different urban transport and mobility issues. Also GIZ and UITP will combine their efforts in training programmes and there will be joint development of studies on issues such as bus fleet modernisation, bus operation, bus-sector reform and financing.

GIZ and UITP have joined forces before when it comes to sustainable urban mobility. With support from UITP, GIZ oversees the Action towards Climate-friendly Transport (ACT) coalition, which was launched at the UN Climate Summit 2019. It is the largest global coalition aiming to catalyse transport as an enabler of sustainable development in line with the 2030 Agenda and the Paris Agreement. The coalition delivers on its goals by connecting innovative approaches with integrated long-term planning, accelerating thedeployment of electric busesin cities around the world (TUMI VOLT initiative).

The Transport and Climate Change week also served as the perfect backdrop for the UITP/GIZ workshop on Bus Fleet Renewal.

In the coming years, many local authorities and PTAs need to replace older bus fleetsat an accelerated pace to reach the targets on the transition to a decarbonised and climate neutral bus fleet.

The objective of the workshop was to provide guidanceandinternational examples on various elements of bus fleet renewal, such as status quo analysis, funding fleet renewal, technology options, and regulatory needs.

The workshop saw the premiere of UITP’s Checklist Bus Fleet Renewal: a decision support tool for bus operators, municipalities, and PTA’s in the process of bus fleet renewal.

Developed by the UITP Bus Committee, the Checklist naturally fits in UITP’s toolbox approach and UITP’s efforts on clean bus fleet renewal, including R&I project such as ZeEUS and ASSURED and initiatives such as the Clean Bus Europe Platform.

The Checklist Bus Fleet Renewal will be launched early May (for UITP members only), so stay tuned!