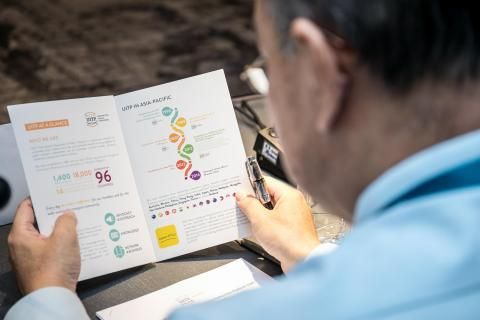 Rethink the Future of Urban Mobility: The Transformation of People-Led Sharing Cities

UITP Asia-Pacific Assembly was held on 29-30 March 2018 in Taipei gathering 126 delegates from 20 cities in Asia-Pacific (Taipei, Beijing, Kuala Lumpur, Seoul, Singapore, Tokyo, …) and beyond (Brussels, Gothenburg, Melbourne, …) to Rethink the Future of Urban Mobility: The Transformation of People-Led Sharing Cities.

The Assembly programme was rich in exchange sessions: an interactive workshop where roundtable moderators led sharing and brainstorming discussions on the topic: Together We Share – How to make data sharing in public transport successful?; a presentation session where speakers shared their expertise and experience on People-Led Sharing Cities: What does this mean for public transport industry?; and a panel discussion with distinguished guests from Taipei, Singapore, Seoul, Tokyo and Gothenburg to exchange on What is the roadmap to a successful Sharing City?

UITP delegates were treated with the best of Taiwanese culture and cuisine during the Welcome Dinner and experienced Taipei public transit on technical visits to Taipei Main Station & MRT System and to Taipei Smart Bus Station.

To know more about the discussions held during the Assembly and platform meetings, click here to read the Wrap-Up report.