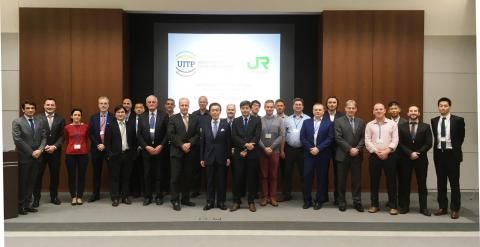 East Japan Railway (JR East) hosted the UITP Rolling Stock Subcommittee’s 35th Annual Group Meeting in Tokyo between November 28th and December 1st, 2017. 21 members from 11 countries attended the meeting and shared their experiences and ideas on the latest technologies and global trends in the field of rolling stock.
The meeting was chaired by Mr. Francois Chamberland from Societe de Transport de Montreal. It began with an opening speech by Mr. Masaki Ogata, President of UITP Asia-Pacific Division and Vice-Chairman of JR East, which he followed by a presentation regarding management and open innovation at JR East. Mr. Takahiro Kikuchi, Deputy General Manager of JR East introduced the company’s latest commuter trains (Series E235) that feature state-of-the-art technology.
The event also included a welcome cocktail party, a casual and formal dinner, and three technical visits to an operation control center and two rolling stock heavy maintenance depots. Thanks to the cooperation of Tokyo Metro, these were all completed with great success.