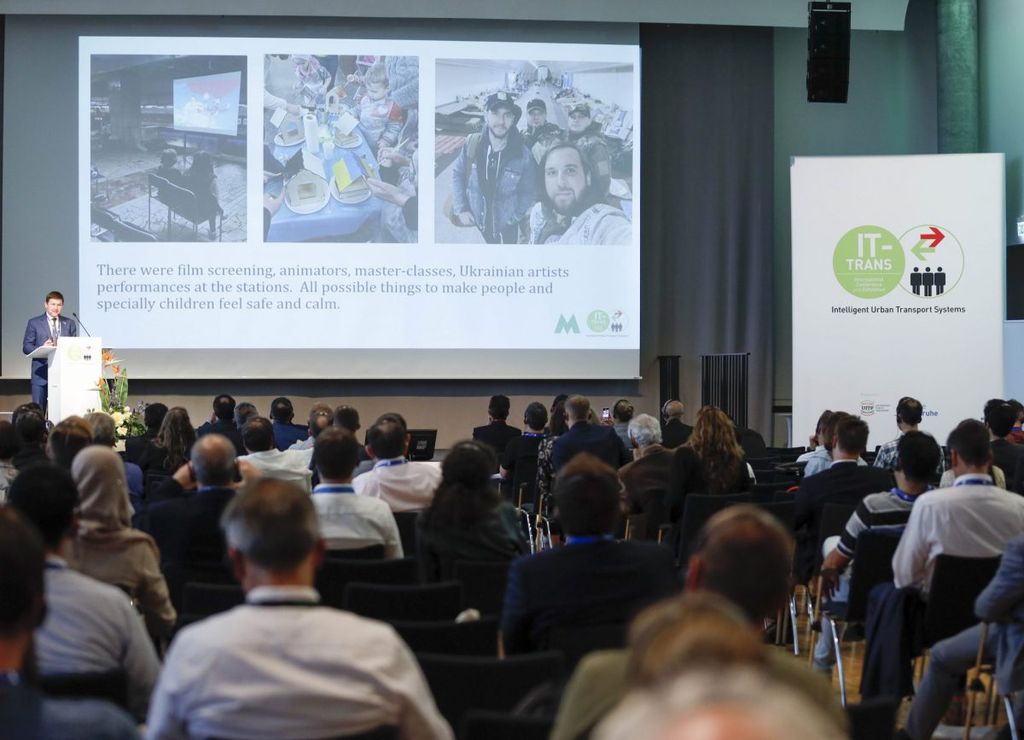 During the 2022 edition of IT-TRANS, UITP had the pleasure to welcome the Head of Kyiv Metro Viktor Braginsky to give a special address to our international audience.

Discussing what daily life has been like for the people of Ukraine’s capital, and those working within the public transport sector, Mr. Braginsky spoke about the resilience of those providing essential mobility – and the now dual role of the underground metro system as both transportation and protection. The resilience of the people of Ukraine has been met with international admiration, and a strong desire to help those in need.

As the eighth edition of IT-TRANS began UITP launched our new approach to help keep Ukraine moving. UITP is using its vast global network and expertise as the only association to bring together all those dedicated to sustainable urban mobility to help the sector across Ukraine.

The war in Ukraine continues to bring devastation, and the supply change for the public transport sector has been disrupted by the ongoing conflict. To help in any way we can, UITP and the operators within our international membership have built a list of the parts that are needed for the local sector.

Before presenting in a special session within the IT-TRANS Conference programme, the Head of Kyiv Metro was kind enough to take some time for a sit-down interview with UITP to discuss life within the public transport sector since the war began, and what he hopes the European and global industry can do to help their fellow colleagues working hard to keep Kyiv moving.

Q: Can you tell our readers what has it been like for the public transport sector in Kyiv since the war began?

During the first days of the war, public transport was stopped completely. The underground metro system began to deliver its second function as a shelter for the population. 20000 people sheltered underground every day in the beginning of the war. As time passed by, the situation slightly improved, but only one metro route was able to continue, and also on one rail line. On the other rail line, trains were situated and used as a dormitory for people. In the beginning, and until services resumed, only one train per hour was able to operate.

Now, those who left the city are coming back, and we have reduced the intervals in the service to trains leaving every 10 to 15 minutes. We are also able to use both rail lines now. However, during air raids, we stopped the trains above ground, because it is not possible to protect passengers during those times, and trains now don’t go by bridge, as bridges are the most vulnerable area for them.

Q: The entire public transport community has been mobilised to help the sector in Ukraine. What has it meant to see this level of support?

Starting from the very beginning, the underground system has become home to thousands of people. And those people needed basic supplies, as their lives changed so much. Together with the city mayor, Vitali Klitschko, alongside specialised companies, and with international organisations and volunteers, they took care of food for the people, warm clothes, medicine, and basic hygiene supplies. Expert psychologists were also there every day to help those in need. To all of the people outside Ukraine who helped us with those basic supplies and support, we truly thank them. We are thankful to those in public transport all across Europe, who transported refugees free of charge, millions of Ukrainians were helped, and taken to safe places.

Q: We’ve seen metro stations used for important addresses from the President, and also for recent high-profile international visits, such as a concert by the rock band U2. As Head of Metro in Kyiv, what does your daily work look like now?

For that reason, I myself now have a double role. Many people are returning to Kyiv and we are currently working to resume our public transport schedules. Even the President Volodymyr Zelenskyy uses our infrastructure for important global press conferences and to address the media as it is the safest place to be. And we are taking the efforts to sustain that level of safety.

Q: UITP has been working with our members and external partners to make the link to provide physical help to the Ukrainian sector with vital parts. What will this type of engagement deliver?

It’s really very important for us and an important question to raise I want to thank UITP for the efforts you have taken here. We need partner support and international help. 80% of the carriages and coaches of the Kyiv metro system have been produced in Russia, therefore the main task for us now is to modernise the system, according to European standards. It is a challenge for us to get spare parts for our coaches (the full ID numbers 81-717 and 81-714) and these are from Russian productions. One of the possibilities that would help us is to find other countries that had these same coaches, which are now unused, and could supply them to us. We are in need of such technical donors and donations. This would help us.

Thank you to Mr. Braginsky and the Kyiv Metro delegation for their time and important words.

UITP was delighted to be able to provide Kyiv Metro with honourary membership, allowing them to come closer to UITP and our international membership. We hope that collaboration and cooperation will continue to help them in their time of need.